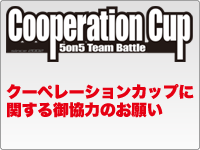 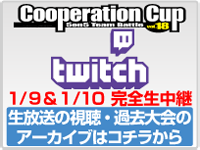 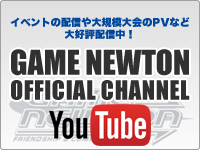 Request for cooperation regarding holding the 18th Cooperation Cup

Among them, the Cooperation Cup is one of the biggest event.
In the last few years, the number of participants has been significantly updated every year, new trials
such as
simultaneous stream of Japanese and English and
holding at a new place were also very well received.

The 18th tournament would be collaborated with the Toushisai in May 2020, and further evolution would be shown.
However, the corona self-restraint started in earnest in February of this year, and the environment surrounding the announcement of the state of emergency and the event changed alot in April.
Even now, the situation remains unpredictable.

The government’s restriction on the number of visitors was going to be softed in September, but it has been extended.
It’s not possible to run the tournament as it used to. No one can be sure about the situation in January next year.
However, depending on the situation and time, it may not be possible to keep the place.

In order to overcome this situation, I decided to re-prepare for the event by taking measures for corona virus
as much as possible.
(We are currently in the process of discussing countermeasures with Hulic Hall, which is the venue)

It is expected that the number of participants will be drastically reduced at the next tournament (I think that there will be no overseas participants, which has been a large number. It will vary considerably depending on the situation in Japan.
The operating funds for large-scale community national competitions such as the coope cup are covered by player participation fees and a small amount of sponsor fees.

The number of participants will decrease = the income will decrease, so is it risky to do at a large venue?
I’ve been saying that every year.
However, it is also true that it was held by enthusiastic video fans, players, and cooperating companies.
What will happen this year? I’m a little worried, but I decided to go ahead with all the measures I can do now.

We are very sorry about the financial situation as usual, but we would like to ask for your support and cooperation.

Individuals, stores, companies, etc. do not matter at all.
I would like to discuss separately about the barter and benefits when you cooperate. (Thank you very much for all the support you have given us)

※Sending pamphlets and other goods, posting logos, advertising in live distribution, etc.
If you have any questions or concerns, please contact us via E-Mail or Twitter.
This year, offline events will be considerably reduced, and it seems that we will have more time to move, so we may create materials and visit to you.
In that case, I would be grateful if you could listen to justthestory.

If you agree with us, we would appreciate your support and cooperation.
September 6, 2020